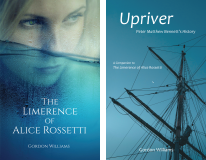 About the Books, and the Writer

I live in Wales, with my wife and our dog, on the border with England and very close to the setting for my first novel The Limerence of Alice Rossetti. The story began as an idea in 1996, but waited until my 'retirement' in 2017 to be drawn together and written – twenty-one years of notes, ideas and biding of my time. Then three enjoyable years of writing, followed by one much less enjoyable year of editing... and here we are!

From first stirrings of wanting to write at around fifteen, I spent my life doing other things, from my trade as a carpenter & joiner, from engineering to farming to scale models, looking forward to the freedom to write full-time. When that time came, the story evolved from the original idea of two families, one upriver from the other, and the problems that arise from one person falling for another; this simple scenario developed into something much wider, drawing upon my lifelong interest in the workings of the Port of Bristol, and close knowledge of the Wye Valley.

My second book Upriver was published in May 2021. Perhaps best described as 'A Companion to the Novel', it is a novella-length first-person account which expands on the historical events and characters of The Limerence of Alice Rossetti - it is the 'History' that is written by Alice Rossetti's grandfather, and the writing of it is an important thread in the novel. Upriver can also be read on its own, quite apart from its connection to the novel.